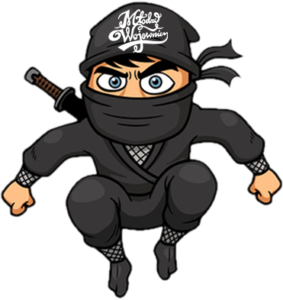 Seven to nine-year olds are what most people consider “the golden age.” They are proficient in their vocabulary and problem-solving skills, yet they are not at the age where they want complete independence from adults. This makes the teacher-student relationship stronger than ever. The problem we discovered is they still lack core skills, and although they are highly intelligent, they struggle to keep up with students ages 10 and up. The solution we found is to provide them with their own program that targets their stage of development in a manner that adapts to their adventurous attitude and youthful nature while at the same time building skills that set them up for success. With that said a structured program introducing core skill-based training in Martial Arts has proven to be very successful.

Here’s an overview for the stages of development of children ages 7 to 9:

We expect them to initially lose focus if there are other, more “interesting” things going on around them. We also expect them to forget simple commands mainly because they try to “over-think.”

The goal for our program is to get them to concentrate on the task at hand despite other distractions. Our goal is to also get them to retain simple information without trying to put excessive thought into it.

We expect them to have emotional stability for the most part on normal days. We also expect them to initially show excessive fear when put on the spot.

The goal for our program is to help them persevere through challenges, especially when they initially feel like giving up. We will also help them face their fears.

We expect them to initially interrupt us when they think something is wrong. We also expect them to show great determination when trying to get their point across.

The goals for our program are to help them know how to address problems and challenges properly without interfering on the overall flow of the class. 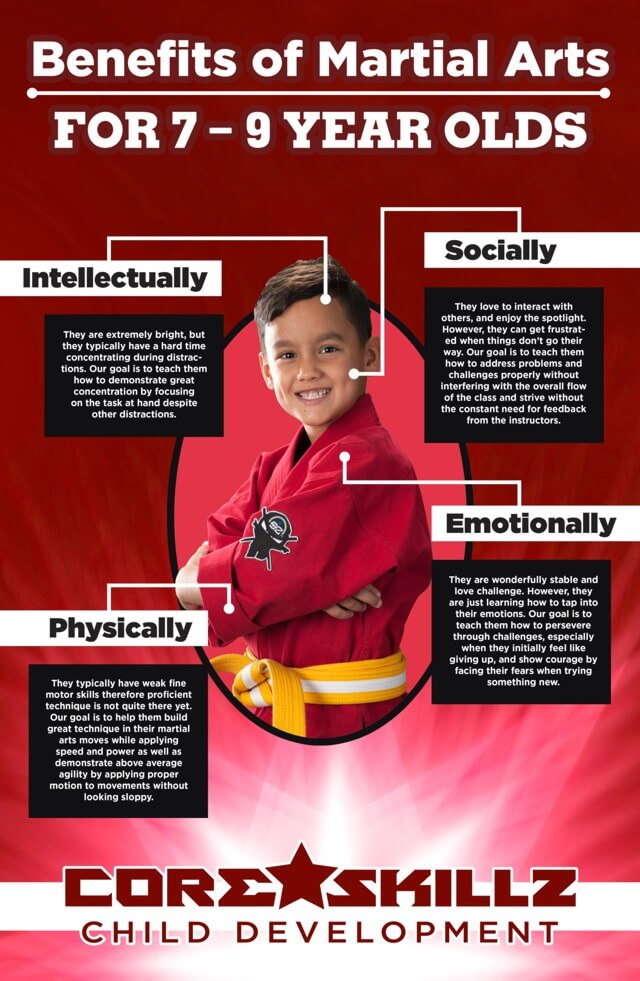 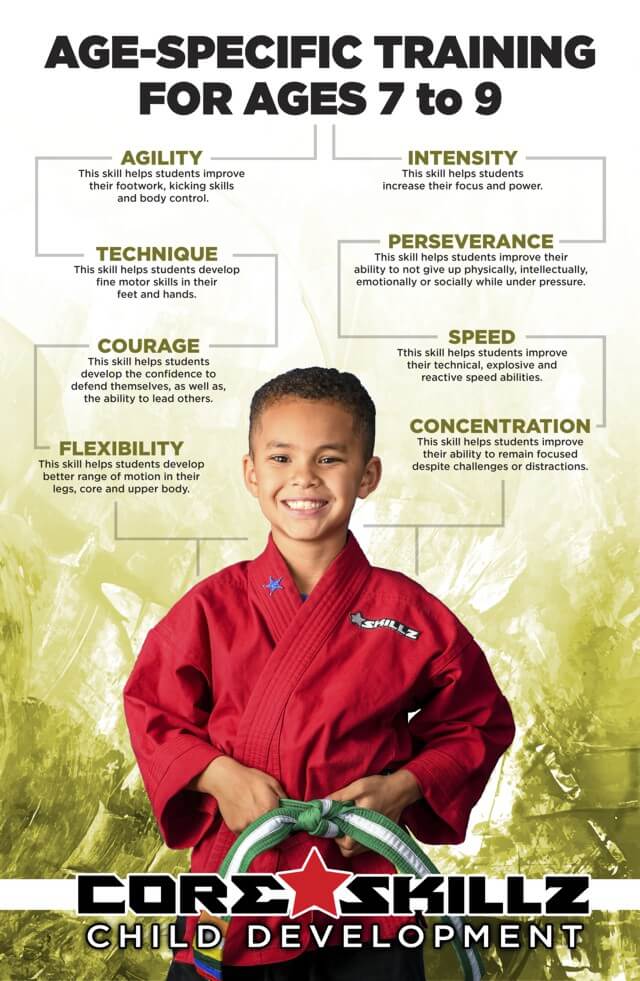 By understanding the stages of development of 7 to 9-year olds, we were able to select 8 age-appropriate skills that make up the Core SKILLZ Program:

We cover one of the above skills per class (in order.) During each class we run a warm-up; deliver a mat chat about the skill; run two or three skill-building drills; and then we have them demonstrate the skill to earn their skill-stripe. They must earn all 8 skill-stripes in order to graduate to the next belt level. Once they earn their next belt they will continue to run through all 8 skills earning their skill-stripes with more challenging curriculum as they advance to each rank. They graduate to the Extreme SKILLZ program after they have successfully completed all 9 belt ranks of the Core SKILLZ program.”

As you can see we take Martial Arts training to a whole new level! We use core elements of traditional Martial Arts curriculums to build skills that are appropriate for 7 to 9-year olds. This means that your child will learn and grow at a pace that is not too easy, nor too challenging. The best part is the Core SKILLZ program will equip your child with skills that they will utilize in every area of their life!